Without You, There Is No Us: My Time with the Sons of North Korea’s Elite by Suki Kim

It is 2011, and all universities in North Korea have been shut down for an entire year, the students sent to construction fields – except for the 270 students at Pyongyang University of Science and Technology (PUST), a walled compound where portraits of Kim Il-sung and Kim Jong-il look on impassively from the walls of every room, and where Suki has accepted a job teaching English.

Life at PUST is lonely and claustrophobic where letters are read by censors, every conversation is listened to, and a communist regime controls behavior, belief, and fairly successfully even thoughts. To the students, everything in North Korea is the best, the tallest, the most delicious, the envy of all nations. Suki is unnerved by their obedience to the regime and the ease with which they lie. Still, she cannot help but love them – their boyish enthusiasm, their eagerness to please, the flashes of curiosity that have not yet been extinguished.

Without You, There Is No Us offers a moving and incalculably rare glimpse of life in the world’s most unknowable country, and at the privileged young men she calls “soldiers and slaves.”

Fascinating is the best the word I can think of to describe this book. I didn’t know much about North Korea before reading/listening, other than the basics such as it’s a communist country with a preoccupation with nuclear weapons, it and South Korea were separated at some point after some war in the past, Japan had invaded Korea at one point, and North Korea was very much closed to the rest of the world. I wouldn’t say that this book is a great textbook for learning the history or political movements of North Korea, but for someone with decent logic and reasoning skills, and a pretty good grasp of world history this was a very engaging way to get a glimpse into the role North Korea has played and currently plays on the international stage.

The book is categorized as a memoir which I would say is accurate, but it felt like a memoir ensconced in truth and important perspective. As a South Korean who immigrated to the United States the author has a very unique context from which to view the events and ideas she experienced in North Korea. Because the book is written from her experience and with her own reflection on that experience it does fit the memoir mold. However, as a reader I trusted her reflections because of her own past and culture. She could see things in a way that others without her kind of love for Korea would not. Which was kind of the point of her efforts. I appreciated not only her interpretation of reactions, ideas, and events based on her personal ties to the country and people, but also her sharing the insight and identity she gained and lost through her experience.

If the book were just Suki Kim’s musings about Korea, war, communism, religion, loyalty, truth, and education then it would be interesting but it may not be as important as it felt to me. Kim is a journalist, one who had followed stories in North Korea before her time as a teacher there. Her perspective from that role gives the book an element of reporting that left me feeling I did understand historical events and international relations better.

I loved how the combination of memoir and journalism gave me interesting facts but also affected me emotionally. There were times as I listened that I was caught up purely intellectually in the picture of North Korea that the author was painting for me. It’s a country so removed from me with so many secrets that it was just mesmerizing to hear what being there, living there would be like. But then I would slowly transport myself and start imagining what it would really feel like to be there. The author would share a scene where the restrictions, regulation, and control were no longer just interesting facts, but the realities of people’s lives, and I would feel such sorrow and hurt for the Korean people and any others living always as prisoners.

My emotions yo-yoed right along with the author’s as she described her love/hate relationship with her job, with her students and coworkers, and with the culture she was proud of, but had also rejected in some senses. In an effort to educate myself more about North Korea I read some newspaper articles after finishing the book. I hated how the articles painted all North Koreans as our enemies. Kim’s writing, on the other hand, reveals the humanity of the people, the ways in which we are all the same, while also clearly broadcasting the naivety and even the threat that the North Korean people’s beliefs and choices hold for anyone they deem their enemy (or that their leaders deem their enemy). However, I didn’t come away feeling endangered or afraid. I felt pity. How can I hate a people who have lived for generations under the brainwashing effect of propaganda and lies? I worry FOR them, just as Suki Kim does, but not ABOUT them; they are not my enemy.

Ironically, Kim is clearly not a Christian or a believer, but I found her approach of love, patience, and correction so Christ-like. She compares the belief and faith in God that her Christian coworkers have to the faith and belief that the North Koreans have in their “great leader” and their communist party. From her experience, I can’t deny the grains of truth in her comparison. But I also empathized with the emotion that one coworker expressed or almost expressed when Kim confronted her about the hypocrisy she saw in the coworker’s religious beliefs. It seemed to me that the coworker at that moment was blessed with a Christ-like love for Kim, despite the confrontation Kim had just initiated.
The coworker emoted mostly with her face, a desire to share some eternal truth that she knew, but that she wasn’t sure Kim was ready for yet. Interestingly, since Kim is the one narrating the experience, I think she must have seen her coworker’s emotion too, otherwise she could not have described it in a way that would allow me as the reader to pick up on it.

I think Kim believed her Christian coworker’s good intentions even if she didn’t completely agree with them. I read a blog post from the author where she talks about the backlash she has received since publishing the book from readers who don’t agree with her actions either. But I feel gratitude for Suki Kim and her good intentions. I think, despite her unbelief, her work and writing will open hearts and minds so that God can work with us all as our world gets smaller through technology and more dangerous if small-mindedness is encouraged. I hope, as the author does, that North Koreans will gain freedom and that the world will be ready to receive and help them when they do. I hope that the good that is ingrained in their culture will be appreciated and magnified, not suppressed or wiped out by our often egotistical and overbearing western culture. This is where history can be our best teacher if we will learn from our mistakes of the past to guide our future.

My husband is a geographer so maps are always an interesting source of information in our lives. He found this data image for me that shows light for areas where navigation data is used and shared. This image shows South and North Korea and China. The darkness of North Korea sums up the country fairly well. A picture is worth a thousand words, as they say. 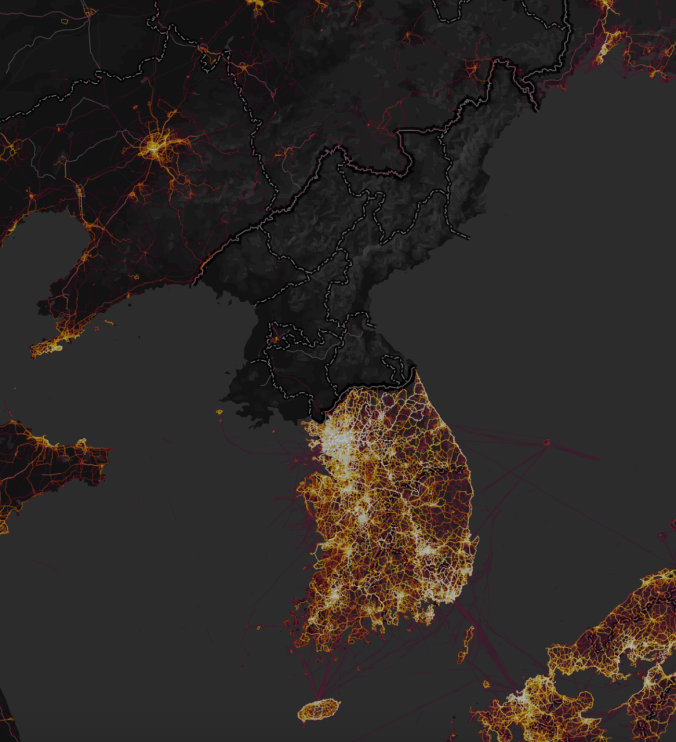 P.S. Listening to this book was a good choice for me. I loved hearing the reader pronounce the Korean names and words that I would have had no idea on had I been reading.

Age Recommendation: 18 and older. To appreciate the implications of and information in this book requires some understanding of history, culture, and politics that I think generally comes only with adulthood.

Appropriateness: Harsh realities of communism, tyranny, poverty, and prejudice are a constant presence in this book, but I didn’t find any of it to be sensational or gory. It can certainly be depressing at times, but mostly I was fascinated. The author does use the term “lover” to describe an old flame, but there is no description of romantic relationships.

I read this because it was selected for book club and I am looking forward to the discussion that will be possible.  This is a perfect book club read.

Other book recommendations: If Without You There is No Us is of interest to you then I think you would also enjoy So Far From the Bamboo Grove by Yoko Kawashima Watkins, Sadako and the Thousand Paper Cranes by Eleanor Coerr,  Just Mercy by Bryan Stevenson, A Tree Grows in Brooklyn by Betty Smith, and The Book Thief by Markus Zusak.

One thought on “Without You There is No Us”

My Tweets
Outside The Resort

Experiencing life outside the resort.

There is no friend as loyal as a book :)

To help enrich the lives of others, we developed RunnersOnTheGo.com to help runners save money on races, running stores, and much more. We also provide the specific local information that makes your travel for business, vacation, or racing as rewarding as possible.

to amuse and to educate

Author of ERUPTION and RECLAMATION