I am breaking form for a moment and reviewing a movie rather than a book. But this movie moves me as much as any of my favorite books, so it deserves to be included in my reviews.

The movie is Taking Chance   and I give it 5 stars. 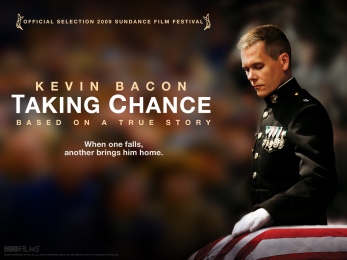 Based on true events – Marine Lieutenant Colonel Michael Strobl escorts the body of a 19-year-old Private First Class Chance Phelps, a marine who was killed in Iraq. The film follows his journey from the mortuary at Dover Air Force Base, to Private Phelps home in Wyoming and gives an intimate look at the process and people involved in putting a fallen soldier to rest. The real power of the film is in the emotions it evokes with its honest and unabashed  portrayal of real people who sacrifice for others and who receive the respect, honor, and reverence that they truly deserve.

This is not at all what you would call an “action-packed” film, but it packs a punch nonetheless.  To tell the events of the movie would sound a lot like a travelogue, but the details and absolute order of each checkpoint in the journey reveals the true dignity and hallowed calling of the men and women of our armed forces. Each person that you meet in the film who is involved in the sacred duty of returning the body of Chance Phelps to his family, lights such a fire of hope and optimism for our nation and citizens because they all give respectful and reverent tribute in their own unique and perfect ways.

I can’t think of any other movie I have seen that is presented with such honesty and truth.  Taking Chance is devoid of any Hollywood dazzle or ploys. Kevin Bacon’s portrayal is perfect and the supporting actors feel so real. This is not a parade of magazine cover faces, but rather a look into true and everyday America.

Through the process of Chance Phelps’s body being brought to rest  we get a glimpse of the intricacies involved in giving our military men and women, both the living and the dead, the honor, respect, and reverence they deserve. The pieces that are shown come together into a powerful whole in which you feel such gratitude and pride for those who give so much for our freedom and way of life.  Even more powerful though, is the vision these events give of how we could be as a nation and as the human race if we were to treat every person and responsibility with the same honor that is evident throughout the movie.

After watching, I feel smaller and bigger. I feel humbled and proud. I feel my priorities rearranging themselves and such gratitude for my life and for those that sacrifice in small ways and who sacrifice everything so that I can live the way I do. And I feel, like the people in the film, the desire to give back in some way, big or small, to those strangers who sacrifice, fight, and die for me. Posting a review isn’t much compared to a soldier’s sacrifice, but maybe by drawing attention to this film in my small way others can also be affected and changed by it’s message.

With that, I say with absolute certainty that every American should see Taking Chance.

My Tweets
Outside The Resort

Experiencing life outside the resort.

There is no friend as loyal as a book :)

To help enrich the lives of others, we developed RunnersOnTheGo.com to help runners save money on races, running stores, and much more. We also provide the specific local information that makes your travel for business, vacation, or racing as rewarding as possible.

to amuse and to educate

Author of ERUPTION and RECLAMATION